Many readers might know that the Pride celebrations held throughout the month of June are a celebration of the 1969 Stonewall Riots, but did you know that these marches are also rooted in anti-police activism?

Many might already know of the Stonewall riots which began on either June 27th or June 28th (depending on your sources). The famous and most circulated version of the evening’s events were as follows:

Eyewitnesses claim that the events preceding the Stonewall riots began as a police raid on the bar, a frequent and routine occurrence at gay bars during that time. A number of patrons were handcuffed and escorted outside by police. Among them was a butch lesbian who resisted arrest and repeatedly tried to escape before she was struck in the head with a baton. She then punched the cop, shouting to bystanders, “Why don’t you guys do something?” This “first punch” is considered the inciting moment that motivated others to fight back against the police. The identity of this woman remains uncertain, but historical accounts suggest that it was Stormé DeLarverie, a Black biracial butch lesbian and drag king.

Unknown to most however during the 50s and 60s, various LGBTQ+ communities across the United States experienced their own events similar to Stonewall. In San Francisco the famous Compton Cafeteria Riots in the Tenderloin, in Los Angeles the famous protests and riots at the Black Cat Tavern and various organizing endeavours in Chicago. All of these efforts were in short reactions to the criminalization of LGBTQ+ community members via dance laws, dress code violations, and police raids of various gay bars.

In 1970 the first series of gay pride event were held, most notably the Christopher Street Liberation Day march in NYC to commemorate the anniversary of the Stonewall Riots, the Los Angeles Christopher Street West Pride Parade (the first city sanctioned Pride parade), and marches held in San Francisco and Chicago. These marches were held as protests against the historical silencing, policing and criminalization of LGBTQ+ community members enacted by the police and other agents of the State.

Today various organizations and collectives like Gay Shame in San Francisco, No Justice No Pride in D.C., Black Lives Matter Toronto, and BreakOUT in New Orleans continue the work of honoring the efforts of early LGBTQ+ activists and the intersections of state violence and LGBTQ+ experiences by calling for the barring of police participation in LGBTQ+ Pride Events. These organizations and many activists throughout the country have asked us to question the involvement of entities like the police in an event historically rooted in fighting back against criminalization and police brutality. As Trans Student Educational Resources Project Director Harper Zacharias noted,

When 45% of trans people are uncomfortable seeking help from police, with multiracial, Latinx and black trans people being least comfortable, we must examine who is being alienated by the presence of police at our pride marches, rallies, and events. As police presence at these events increases, the people who are already the most marginalized will feel the least comfortable attending and partaking

As we move into the Pride season the San Mateo County Pride Center would like us all to reflect upon our history, and upon the various experiences that affect the members of our community particularly those who are Black, Indigenous, Latinx, transgender, gender non conforming, undocumented, poor, incarcerated and others who are often marginalized.

How might we build a Pride season that creates safety for those of us most marginalized and disadvantaged by society?

May is Older Americans Month

MAY is Older Americans Month On Friday night, April 27,[...] 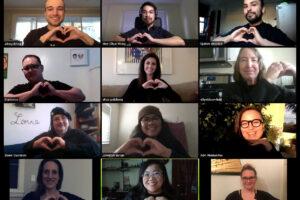 The Pride Center is here for you, connect with us

Click the picture above to see the blog that our[...]